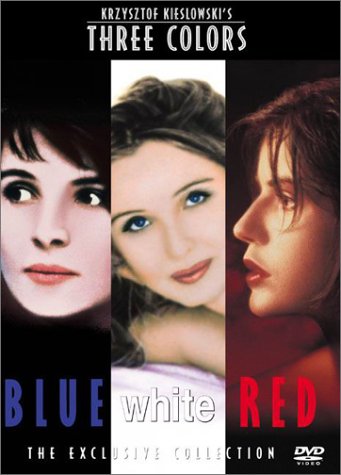 Miramax Home Entertainment is proud to present BLUE, WHITE and RED, the acclaimed films by director Krzysztof Kieslowski. Hailed by filmgoers as some of the most absorbing, engaging, well-crafted dramas in recent memory, the box set of BLUE, WHITE and RED Each DVD disc includes lengthy bonus features.

BLUE: Academy Award winner Juliette Binoche ("The English Patient," Best Supporting Actress, 1996) stars as a young woman left devastated by the unexpected death of her husband and child. She retreats into the world around her, but is soon reluctantly drawn into an ever-widening web of lies and passion as the dark, secret life of her husband begins to unravel.

WHITE: Sexy Julie Delpy ("Before Sunrise") stars in a mysterious tale of a man whose life disintegrates when his beautiful wife of six months deserts him. Forced to begin anew, he rebuilds his life, only to plan a dangerous scheme of vengeance against her. Winner of the Best Director Award at the Berlin Film Festival.

RED: Irene Jacob ("The Double Life of Veronique") stars as a young model whose chance meeting with an unusual stranger leads her down a path of intrigue and secrecy. As her knowledge of the man deepens, she discovers an astonishing link between his past and her destiny.

Even though one can view each segment of Krzysztof Kieslowski's "i"Three Colors trilogy on its own, it seems absurd to do so; why buy the slacks instead of the entire suit? Created by Kieslowski and his writing partner Krzysztof Piesiewicz for France's bicentennial, the titles--and the themes of the films--come from the three colors of the French flag representing liberty, equality, and fraternity. Blue examines liberation through the eyes of a woman (Juliette Binoche) who loses her husband and daughter in an auto accident, and solemnly starts anew. White is an ironic comedy about a befuddled Polish husband (Zbigniew Zamachowski) who takes an odd path of revenge against his ex-wife (Julie Delpy). A Swiss model (IrÃ¨ne Jacob) strikes up a friendship with a retired judge (Jean-Louis Trintignant) who eavesdrops on his neighbors in Red. The trilogy is a snapshot of European life at a time of reconstruction after the Cold War, reflected through Kieslowski's moralist view of human nature and illumined by each title's palate color.

The DVD set has numerous extras spread throughout the three discs; the end result is a superior collection. Each disc has a short retrospective, culled together from new interviews with Kieslowski's crew, plus film critic Geoff Andrew, biographer Annette Insdorf (who also does the commentaries), and fellow Polish director Ageniska Holland. Producer Marin Karmitz also reminisces about the experience. There's an exceptional effort to show the magic of Kieslowski (who died two years after the trilogy) through a discussion of his various career phases, interviews with the three lead actresses, four student films, and archival materials including simple--and wonderful--glimpses of the director at work. Excellent insight is also provided by Dominique Rabourdin's filmed "cinema lessons" with Kieslowski. Without viewing any of his other films, this set illustrates the uniqueness of Kieslowski. --Doug Thomas

The CCP4 software can be downloaded and runs on Windows, Mac OS and Linux. It provides an integrated suite of programs for determination of macromolecular structures by X-ray crystallography that can be accessed through a graphical interface on your computer, through CCP4 Online, or through CCP4 Cloud.

CCP4 offers a variety of workshops and courses for students, early career researchers, and project leaders. We aim to develop cutting edge approaches to experimental determination and analysis of macromolecular structures. Please contact us if you want to join CCP4.

Sign up for the Bulletin Board email list and follow us on 3/4" Drive 6 Point Imp Socket - 2-5/8" for news and help. Don’t hesitate to report any issues you may have with our software.

NB. If you are looking for our old website, it is available here.