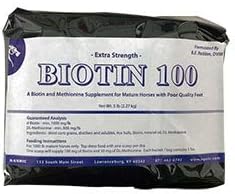 NANRIC is the exclusive source for Dr. Redden's Extra Strength Biotin 100. Extra Strength Biotin 100 was formulated by Dr. Ric Redden over 15 years ago for his personal podiatry cases. Biotin has long been noted as a supplement that aids natural keratinization process. Hair and horn (hoof capsule) are constantly undergoing growth, maturation and keratinization. Biotin 100 has become hoof supplement of choice worldwide. Feeding 1 oz per day delivers 100 mg of Biotin and 50 mg of DL-Methionine. This feeding is recommended for a 1000 lb+ mature horse. One gallon lasts 120 days so it costs you less than 63 cents a day to feed the strongest Biotin on the market. If you have tried all others and are not convinced that Biotin supplements are helpful try our Extra Strength Biotin 100 formula and see results. We added the Bag Only option because many of you already have buckets and asked for an alternate refill option.